When I first met Roosevelt Conyers (a.k.a. Victor Andrews), he had been wrestling for about a year or so. At the time, I was working as Ring Announcer for GOUGE Wrestling based in Raleigh, NC, and he was on the line-up for a Saturday night show. I immediately recognized two things about him that I really liked: His personality and his passion. 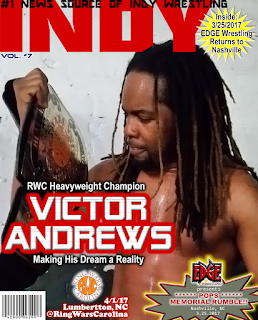 In the wrestling business, you meet a lot of different personalities in that locker room. Each one seemingly at a different stage of their wrestling career. Some can be pretty intimidating, especially if you've never met them before. Some are jerks. But most of those guys love what they're doing. That was Victor. You could just see all over him the passion he had for pro wrestling. That particular Saturday night, there were only about 40 people in the audience. There was something else going on in the area and Greg, the promoter didn't realize it until he started seeing the lack of attendance with bell time approaching quick.

Victor and I hit it off pretty well on both a professional level and on a personal level. His attitude, his genuine character, and his passion had earned my respect. But neither of us knew what would bring us together again in a very cool way. I attended WrestleMania 27 by myself in Atlanta, Georgia in 2011. I loved it. It was my first LIVE 'Mania and I was in awe. The Georgia Dome was the perfect venue and having the Rock back and hosting the show made it a highly anticipated event. I knew that night this would not be my last WrestleMania. 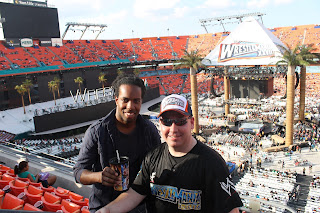 After finding out that WrestleMania 28 would be in Miami, Florida, I began calculating what it would take to get there. But this time I wanted to take my whole family. There were six of us...me, my wife, and my four children. After getting six tickets, we determined that we would not take my youngest two daughters. So that left me with two tickets, which meant two empty seats beside us. I put on facebook that I had two tickets to WrestleMania 28...first come, first serve.

Probably not even an hour after I posted it, Victor messaged me that he was definitely interested. Long story short...He and I attended WrestleMania 28 together in Miami, and it was yet another very memorable event which I will never forget.  So, unlike other talent in the locker room, Victor and I share a "WrestleMania Moment" together that I will always remember and cherish. 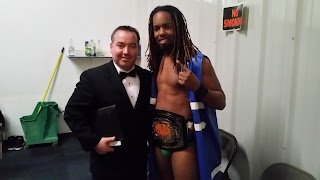 That was 2012, and at the time "Mr. Everything" hadn't won any titles, and wasn't being booked nearly as much as he would have liked. Fast-forward to 2017, and he has won eight different championships and wrestled for at least seventeen different promotions over seven different states, including Ring of Honor (ROH), GOUGE, Ring Wars Carolina, and a host of others. It didn't take him long. When you have a guy who has as much passion for this business as Victor Andrews, and a work ethic to go anywhere, anytime, just to have a chance to do what he loves to do, you have a guy who is putting sacrifice and work into his dreams.

Among his accomplishments in the ring, Victor is the current reigning Heavyweight Champion for Ring Wars Carolina out of Lumberton, North Carolina. He defeated Hangtyme for the title on November 5th, and then successfully defended the title against him in a rematch on February 18th, 2017 as part of the highly-anticipated "ONE NIGHT ONLY" event in which APCW and RWC joined forces to bring legends Magnum T.A. and Nikita Koloff in as special guests. Andrews is also the reigning Mid-Atlantic Masters Champion for Premier Wrestling Federation (PWF), which he has held since defeating "Brutal" Bob Evans on January 29th.

Most recently, Andrews successfully defended the RWC Heavyweight title again, this time against "Side Effect" on March 4th! You can see the match in it's entirety below.

"Mr. Everything" is also doing his share of charity work, which every pro athlete should do in my opinion. Andrews is currently involved in the National Inclusion Project for children with disabilities called "Dancing Like the Stars". You can vote for him at the link below.

It's easy to write about a guy who gives his all for the business he loves. Here at The Allen ReAction, we wish all the success in the world to Victor Andrews. He's working hard. He's putting in the miles. He's paying his dues. I still remember what he told me on April 1st, 2012 inside the Sun Life Stadium in Miami. He said: "One day Joe...One day, both of us are going to participate in WrestleMania....You are going to announce me to the ring. And we are going to realize our dream."

Well, if anyone is going to give it all he has to make that dream a reality, it's Victor Andrews. It appears to me that it's just a matter of time, before many more fans  get familiar with the guy, known as: "Mr. Everything".

For The Allen ReAction, and for this special edition of INDY Magazine, I'm Joe Allen. See you at ringside. 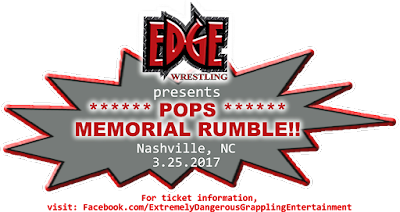 The vacant EDGE Tag Titles are on the line when
The Royal Round Table clashes with The Hounds of Hades!