"The Voice" Is Back! 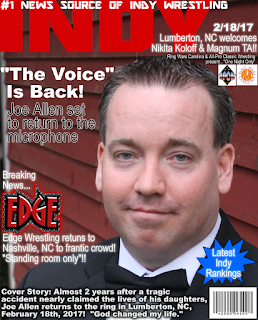 Hello Fans!! I'm Joe Allen, and I'm pleased to announce that this past Saturday night in Lumberton, North Carolina, I made a return to the ring after a near two year absence. Oh, and did it feel good to be back on that microphone. That PA system...the arena...the ring...the fans...the locker room full of unbelievably talented athletes....It's my happy place.

In May of 2015, many of you know that a family accident drastically changed the course and direction of our family. I'm highly pleased to be able to report to you that as of February 2017, all appears to be well...praise God.

This past Saturday night in Lumberton, on the same night I'd make my return, I had the incredible pleasure of meeting for the very first time...NWA legends: Nikita Koloff & Magnum T.A.!! And not only that, but I got to introduce them to the crowd at the Priscilla King Arena! I never had the opportunity to announce them when they were both wrestling, so I prepared a verbal tribute of sorts, that would basically acknowledge their in-ring accomplishments, and then end with a big pop announcement, including their ring hometown and weight. It was awesome! What a moment for this grown kid from Augusta, Georgia. It was truly a dream come true. I got goose bumps as I gave it my best effort to give them their just announcement.... "It gives me great honor and pleasure to introduce to you...from Moscow...weighing in at 121 kilos..."The Russian Nightmare" NIKITA--- KO---LOFF!!!!" Oh, what a moment. 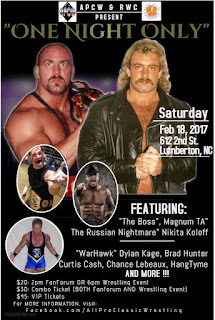 Speaking to both Magnum and Nikita was a tremendous honor. In just a 6-year career, Magnum had made so much history. He was literally on the verge of winning the NWA World Title when his accident happened in October 1986. To be able to tell him "thank you" for his contributions to wrestling, was a very cool moment. And then...on the same day as we all found out about the passing of wrestling's perennial "bad guy", Ivan Koloff, having the opportunity to talk to and shake the hand of Nikita...a guy who traveled closely with Ivan for years, it was truly an honor. Nikita is just a great person, and not ashamed of his faith, which I personally think is fantastic for a man with his fame and notoriety.

As if that wasn't enough, six big matches from some of the best independent talent in North and South Carolina were on the agenda for the evening, including not one, but TWO Heavyweight Championship Matches! The event was billed as "ONE NIGHT ONLY". Not only were Nikita and Magnum inside the Priscilla King Arena for one night only, but the Lumberton-based Ring Wars Carolina (RWC) promotion was joining forces with All-Pro Classic Wrestling out of Laurinburg for this very special evening of wrestling and legends.

A Double Main Event!  The "Warhawk" Dylan Kage was set to defend the APCW Heavyeight Championship belt against the #1 challenger and rival, "The Alpha Gladiator" Pierce. This is certainly not the first time these two have met. And then...representing RCW, the Ring Wars Carolina Heavyweight Champion, "Mr. Everything" Victor Andrews would be defending his title against the #1 challenger to his belt..."Hangtyme". I mean, it's not very often fans get to witness two heavyweight championship matches on the same night, in the same building! But Saturday night in Lumberton, it happened.

Here's a recap of the action, as RCW and APCW present..."ONE NIGHT ONLY"! 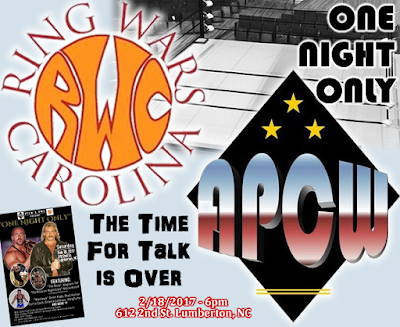 What an evening! It was truly great to be back! And to top it all off, I got to co-ring announce with a new friend of mine, fellow Ring Announcer representing Ring Wars Carolina, "Prime Time" Perry Thompson, who is truly talented on the mic in his own right!
Thanks for taking the time to check out "The Allen ReAction"! It's good to be back! Talk to ya soon!!

See you at Ringside,
Joe Allen
"The Voice" of the Carolinas