Is Damien Wayne the Best?

Arguably the #1 Independent Wrestler in the world today will be in Nashville, North Carolina on March 25th. 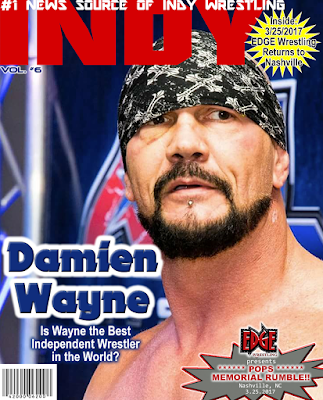 “The Unpredictable One” Damien Wayne is bringing his devastating arsenal of in-ring talent to EDGE Wrestling with only one thing in mind: The EDGE Heavyweight Title.

For 14 years, “Mr. Mid-Atlantic” has instilled fear into his opponents across the country. Wayne’s pile-driver is a move that can strike from just about any position, and at any moment, and if he hits you with it…your night is finished.

I remember a match in Roxboro, North Carolina in 2012 in which Damien Wayne was wrestling a very talented up and coming talent named Mike West. West came in very hot, on a role, and looked to give Damien a run for his championship. In one moment West was in control and looking to upset Damien, who was the then-North Carolina Heavyweight Champion. Then…all-of-a-sudden out of nowhere…PILE-DRIVER!! It came so quick, Mike never had a chance to counter. Three seconds later and I was announcing Damien as the winner. That move is a game-changer.”

Another weapon in Damien’s repertoire is a flying elbow from the top rope. Many good wrestlers have found themselves on the defeated end of that elbow. Damien is a tremendous scientific wrestler. He can also be very methodical and calculated. He can brawl with you. He can fly off the top rope. I mean, you name it, Damien Wayne can do it in that ring.

And now he’s entered himself into the POPS MEMORIAL RUMBLE on 3/25 in Nashville, North Carolina, at the National Guard Armory. The winner gets a shot at the EDGE Heavyweight Belt! Wayne has made no mistake about it. He's coming to Nashville to win the belt, and I don't think there's a wrestler on that card who is looking forward to his arrival. You'd have to see Damien in person to understand the talent that he possesses. He's something else to see, and I think...well, I won't say he's "easily" the favorite the win, because you have some very capable and talented superstars in EDGE Wrestling who will also be after that belt. But I do think Wayne comes in as the favorite to win the Rumble and advance to a title match against the reigning champion, Scotty Mathews. 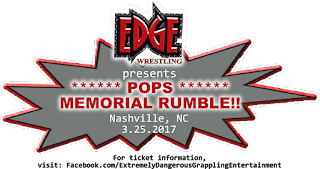 It certainly is a prime opportunity for Wayne to add yet another title to his resume. Can he overcome the up and coming young talent in EDGE? Will he match up well against a locker room who will no doubt be preparing for his in-ring style. Well, time will certainly tell, but one thing’s for certain…with the presence of Damien Wayne at the POPS MEMORIAL RUMBLE, business in EDGE Wrestling is about to pick up!


For this edition of The Allen ReAction, I'm Joe Allen. We'll see you at Ringside!