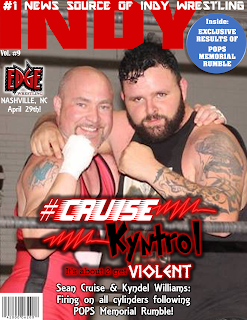 It was a long time coming...and now it's over. This past Saturday night at the National Guard Armory in Nashville, North Carolina, EDGE Wrestling and CEO Link Alexander made history. Good history that is. The late Chad Williams, who gave EDGE Wrestling its name and known by fans as "POPS", would have been extremely proud of the happenings of this weekend's events. The fans showed up and packed the armory in Nashville...a venue in which Williams frequented often, along side of his son Kyndel. "He loved wrestling", Kyndel proclaimed proudly this Saturday. "He loved to watch me wrestle."

The front office and executive leadership at EDGE Wrestling were determined to make this event special, and they certainly didn't disappoint. Eight matches were on the line-up, including the POPS Memorial Rumble, a match in which the winner would receive a crack at the EDGE Heavyweight Championship in the Main Event!

Prior to getting the event started, EDGE CEO Link Alexander welcomed  yours truly as EDGE's new official Ring Announcer. I'm very honored to be a Ring Announcer. It's what I love to do, and I'm very thankful to Link for the opportunity to sign with EDGE. It's going to be a great ride.

Next up, we got things kicked off with a bang, as Pops' nephew Brandon Williams played the national anthem with his electric guitar. I've never heard anything like it. The absolutely perfect way to get everything started and he nailed it! From there, the action began. Here are the official match results from the POPS Memorial Rumble show...

Exclusive Results:
What an evening it was! It had all the ingredients to make history. An opportunity to honor someone loved by the masses...a great locker room of competitors, both veteran and young stars...and an insanely exciting crowd of wrestling fans. That's what made this night special. It wasn't one person that made it happen. It was the collective efforts of everyone. From the DJ, to the wrestlers, to the fans...it was an incredible night of wrestling.

Fans...don't miss EDGE's next event...coming to you LIVE from the armory in Nashville. Same place, different date. April 29th. Mark it on your calendar. What will "The Unpredictable One" Damien Wayne do next? What will happen with the new alliance of Kyndel Williams and Sean Cruise, now being billed as "Cruise Kyntrol"? Can Erik Ellis hang on to the "Over the Edge" Championship with Jordan Flyght breathing down his neck? Can the Hounds of Hades prove that beating the Royal Round Table was just the first step in a long reign of destruction in EDGE? 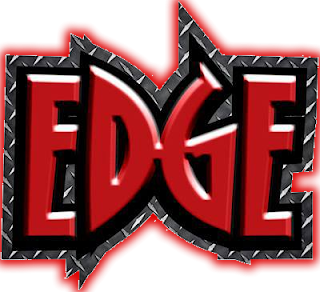